You are here: Home / Get Real / The Red Hair-ing

To say my daughter, Haley, is independent would be an incredible understatement. I guess that is what you get when you get inspiration for your child’s name from a comet.
In the fifth grade, Haley wanted to quit Girl Scouts because she just didn’t want to “dress like everyone else.” Besides, she had really gotten into music. First, it was piano, then the bass guitar, then the guitar and finally the bassoon.

For years she had also been obsessed with having red hair. We sprayed her hair red for Valentine’s Day, Crazy Hair Day at school and a couple of other occasions. I thought that might get it out of her system, but nope. It just confirmed what she wanted: Bright. Red. Hair.

Last summer, we dyed it with a semi-permanent color over her brown hair, making a dark henna color that was really flattering with her hazel eyes and fair skin. There is red hair in our family, after all. It definitely suited her. It even satisfied her for a while.

A few weeks later she upped the ante. She wanted brighter and bolder, as in fire engines or sports cars. She researched everything—she found the precise dye, watched the YouTube videos and learned the proper technique and care. We even discussed the dress code of her school that stated, “No un-natural hair colors such as blue, green or purple will be allowed at school.” It didn’t say red, so she wanted to go for it.

I relented, thinking, “How red can it be?” 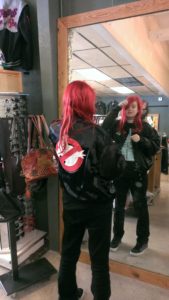 We dyed it a couple of weeks before school started in September. Her hair came out as red as A STOP SIGN IN THE BLAZING TEXAS SUN! This was a natural color for apples or cherries, but not for hair.

I was surprised. My husband was speechless. My son was shocked. And Haley was THRILLED BEYOND WORDS!
The first thought that came to my mind was, “We are going to hear about this when school starts.” Still, Haley said, we will deal with it when we come to it.

School started and my kids packed off to middle school. After a couple of weeks, my usually bubbly child changed. She became sullen and withdrawn. She avoided eye contact with me and with her father, often looked like she had been crying when I picked her up and went straight to her room after school. She started asking me about transferring to another school, or checking out private schools.

Haley didn’t want to tell me what was going on until finally one day, she burst as she got into the car after school. One of the administrators had given a presentation during school orientation, covering all kinds of school policies, including—you guessed it!—THE DRESS CODE!

When the subject of hair color was broached, the administrator added these words with emphasis, “ …and unnaturally red hair.” While doing so, the administrator stared at Haley in front of the entire assembly and paused until the kids started staring too, poking Haley in the shoulder and calling her “Ariel” and “Ariana.” The teasing continued after assembly, in the halls and in the classrooms.

Later that same week, Haley was approached by the same administrator in the cafeteria and told that she had “until Friday to do something about that hair or else face the consequences.”  Then, later in the hallway she was stopped, again.

We looked at other colors, dulling it down, but every time she ended up in tears and said that it was more important to her to keep the red hair even if she had to take a bus to another school, a school that did not have bassoon and a music program.

I called the school to check the facts. After all, I know my kid is pretty dramatic—she gets that from her father’s side. No, really! The same administrator said that she hadn’t seen Haley. She had never been in the office or had any reason to see her in class, no office reports or teacher complaints on file. Then, I reminded her that she had talked to Haley in the cafeteria and in the hallway. Nope. Never. Great kid, super student.
I said, “She has red hair.” Oh yes, her. “That needs to change.”

I realized then that the administrator didn’t really know this kid, my kid. Haley was just somebody that could easily be singled out and treated differently because of how she looked.

I sought expert advice from a parent who had been through something similar. I decided to talk to the principal. He was very understanding and calm, which is more than I could say for myself. (I may have used the “F” word a couple of times, okay three or four.) I told him that my daughter chose this school for the music program and that she was an amazing student and musician, but that the way this was handled was more like bullying than procedure. I recounted how Haley had been singled out for her appearance on at least three occasions, in front of her peers. I explained that it was distracting her from her learning and her desire to go to school each morning.

He assured me that learning was the priority at the school, that supporting kids to be the best they could be was his goal, and that he hadn’t noticed anyone with extremely red hair, but he would follow-up and get all sides of the story and get back to me. He emphasized that belittling kids, especially in front of their peers was not at all appropriate in his eyes. He later left me a message not to worry about the color of her hair and that he hoped that Haley would have a good year.

Haley did have a good year. The administrator who had singled her out, now ignored her in the hallways and in assembly, although random teachers took her out of the lunch line, or talked about her in the hallway, or interrupted her classroom instructor to ask, “When is this going to be taken care of?”

My daughter, who now was back in the groove of school and music, said it was a shame that these grown-ups weren’t willing to get to know her, but were eager to judge her.
At the beginning of this school year, the principal of my daughter’s school pulled my husband and me aside, saying that he had relaxed the dress code regarding hair color officially at the beginning of the year. He said there was some pushback from a few teachers, but he used this story to make his point:

“I attended a concert put on by our school and there was a girl with long bright red hair playing some complicated woodwind instrument. Then, she put down that instrument and went over to the keyboard for a few songs and played that. Then she went back to the woodwind section. This kid obviously has a lot of talent. So, why should I admonish her for the color of her hair? After all, aren’t we here to help these kids grow their talents and achieve their dreams?”

As he recounted what he had witnessed, I had tears in my eyes. I hugged the principal, right there at the middle school bonfire!

As we say in Texas, everything is a “blessin’ or a lesson”. It is our job to figure out which it is. In this case, my daughter taught me about the importance of being accepted for who you are, instead of being judged for who you should be or what you look like.

2. Choose your battles. When you are a 13-year-old girl, hair isn’t everything, BUT IT SURE IS SOMETHING! To her it was more important to express herself this way than it was to continue at a school with the music program and instrument that she loved dearly.

3. Never take a “No” from someone who can’t give you a “Yes”. This is great advice for my career changers. I must have gotten 100 NO’S over the years about changing careers from teaching to counseling and from counseling to coaching.

4. Surround yourself with cheerleaders. Now, there are some people who you need the truth from—including your doctor and YOUR COACH. Everyone else, including your friends and family, should cheer you on for the most part. That is my opinion, you are welcome to disagree.

5. Get advice from someone who knows. Thank God for another friend who had been through something similar with her daughter and had sought great legal advice.

6. Being unkind is never the answer. Although there are certainly rules intended to keep us safe—like speed limits and stop signs—there is no room for unkindness. It solves nothing and the only answer is LOVE.

Oh, and by the way, she wants MIDNIGHT BLUE hair now.

Do you know what your heart wants? Schedule a free strategy call to discuss your heart’s desire and how to achieve it.

Are you ready to get the career and life you deserve?

Begin by scheduling a complementary 30 minute Strategy Session to get a snapshot of your needs and learn how coaching may help.

Are you ready to get the career and life you deserve?

Begin by scheduling a complimentary 30-minute Strategy Session to get a snapshot of your needs and learn how coaching may help.